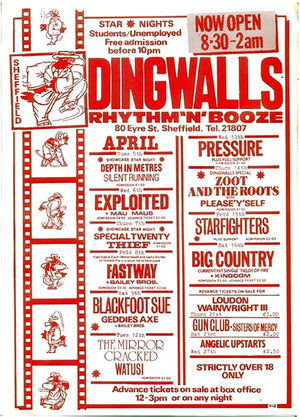 Announcement for the gig at Dingwalls, Sheffield


Also performing: Demons of Youth aka Destructor and Xpozez

As the announcement on the right hand side shows, this gig was originally


scheduled for Dingwalls in Sheffield as support act with Gun Club

You definitely shouldn't miss reading everything about this extraordinary gig


at Sisters XXXV The greatest gig ever ?


An audience audio recording from this concert does exist and is in circulation among the fanbase...


Diverse video recordings, none of them complete, do exist as well. see this list for example.