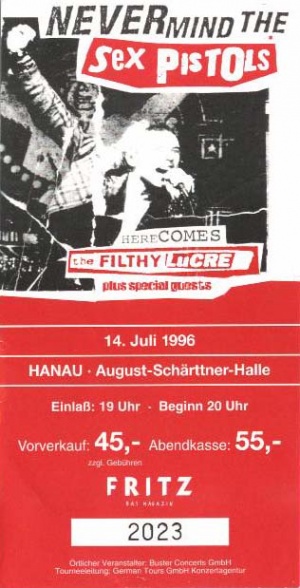 Ticket for the original venue

The concert was originally meant to take place in the August-Schärttner-Halle in Hanau,
where many fans had already been waiting. Shortly before the beginning, they were informed
of the new venue and escorted from Hanau along Frankfurt to Offenbach .... on quite a hot day, actually.


and the final concert of The Sisters' Roadkill 96 Tour.

Among others, German concert promoter mogul Fritz Rau enjoyed the gig from the VIP section in the audience.


A bootleg recording of this concert, including some additional tracks, is circulating


under the title The Golden Audience