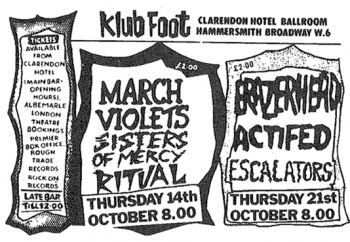 Old press clip of the gig

Other acts on this occasion - The March Violets, Ritual

- As this concert was not recorded, this setlist is probably incomplete -

- Our thanks for this go to the first and last archive. -

A MIGHTILY depressing affair this, despite the presence of a pair of Leeds' most likely lookers.
Probably due to the venue as much as anything.


In front of a scattering of punks, Sisters Of Mercy made a noble effort at recreating
the strange murky density they've adopted and rearranged from the twilight zones of heavy metal.
Singer Andy Taylor was his customary ghoulish self, dripping leech-like from the microphone and
peering into the dark with rattlesnake intensity.


Around him, the likes of Marx and Gunn fired spastic salvoes of guitar across the galvanised
stammer of drum machines, reaching heady spaces in "Floorshow" and "Adrenochrome",
cartwheeling through shadows in "1969" and "Body Electric".


In fact they were great, but detached and dislocatted in the manic depressive spaces of this
dour empty toilet of a place. The only time Taylor smiled was when he got a persistend heckler
ejected by bouncers after goading him with a mike stand round the ears.


March Violets were powerful but also repulsive. There can be no denying the surfing supercharge
of their bass/guitar/drum machine axis, nor the blunt efficacy of riffs like "Grooving In Green". But
I found Rosie Garland's screeching soprano more painful than unsettling, for all her tubercularly
loathered ambience, while co-frontsperson Simon D roared and ragged at the microphone as though
he'd like to bury the audience, having torn them painfully limb from limb beforehand.


The Violets have plenty of potential, but at the moment their arrogance is too eager.
For Both bands, I was left wishing for another tim and another place.