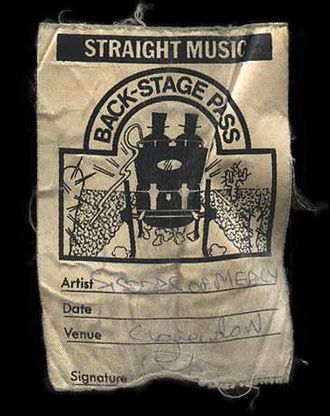 Backstage Pass from the gig

Support act with The Psychedelic Furs

Elsewhere, in The Psychedelic Furs Gigography, the name of this venue is listed as De Montfort University. According to this Wiki, Leicester Polytechnic became De Montfort University in accordance with the Further and Higher Education Act in 1992, establishing it as a degree-awarding body in its own right.

Anyway, The Sisters of Mercy secured a backstage pass from this gig, which you can see here on the left side and which is also displayed on their very own homepage right on top of the entry Sisters Showcase - Backstage Passes, Page One.

A Live Recording of The Sisters' show does obviously exist and is in circulation among the fanbase.


The Sisters of Mercy - Body Electric - Leicester Polytechnic, 09/10/82 - still video with many thanks to spiggytapes