This concert was part of the UK Spring Tour in 1983


As with the first one nine months earlier, there's nothing much known


about this second gig of the Sisters of Mercy at The Venue, though.

Other acts on this evening were Ritual and Baba Luma.


One of the two short reviews below can also be found here in this pretty blog...


Any further information should be very welcome.


The Sisters of Mercy, The Venue, London - Jolene -

The tracks are listed in their correct order.


The only known recording from this gig is incomplete, though, and does not feature Gimme Shelter;


the song is mentioned last, however, in one of the press reviews below.


Thanks to spiggymr7, there's a still video of Jolene available for a listen here on the right side.


SISTERS OF MERCY
The Venue

ENIGMATIC, PERVERSE, deadpan, the Sisters of Mercy are so black, they’re a total eclipse of the art.

Andrew ‘Spiggy’ Eldritch, ‘mother superior’ of the Sisters, is a perfect reptilian Rasputin. He coils and recoils his spindly frame round the mike-stand, uttering lyrics in a voice that moves from a deep shakey retort to an ear-shattering scream. He unleashes a torrent of prowling malevolence and brooding sexuality like other Lizard Kings we have known and loved (to death). He’s posey as hell.


Against this, you have the subdued mania of Mark, the first guitarist and young Ben, the second who has a look which says, “if I concentrate hard enough, maybe this horrible nightmare will go away and I can retake my Physics ‘A’ level in peace". Craig, bass, just concentrates and chews gum.


You get the same merciful release listening to oldies like ‘Body Electric’ and ‘Alice’ and newer songs like the slow and mesmeric ‘Burn’, ‘Valentine’ and ‘Anaconda’ as you might listening to (or feeling) Motorhead. They share the same larger than life heavy metal quality and surreal bad-trip lyrics. They even do ‘Gimme Shelter’ for chrissakes. How can songs about doom, death, destruction and drugs leave you feeling energised, vibrant, exorcised, even…happy.


Probably because it’s all a huge joke.


They’re definitely forging their own groove, which, while complimentary to other bands (Sex Gang, Death Cult, March Violets)is somehow on a plane of it’s own: a superior plane. Could this be because they don’t take themselves too seriously?


You decide. Let’s just say that they listen to The Monkees on the way to gigs.    -    Elissa Van Poznak 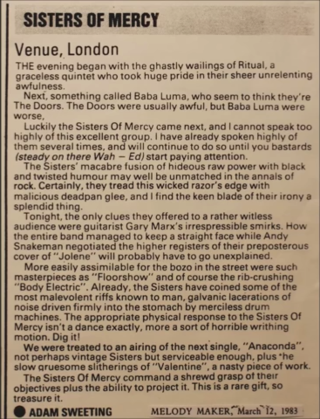 
THE evening began with the ghastly wailings of Ritual, a graceless quintet who took huge pride in their sheer unrelenting awfulness.


Next, something called Baba Luma, who seem to think they're The Doors. The Doors were usually awful, but Baba Luma were worse.


Luckily the Sisters Of Mercy came next, and I cannot speak too highly of this excellent group. I have already spoken highliy of them several times, and will continue to do so until you bastards (Steady on there Wah - Ed) start paying attention.


The Sisters' macabre fusion of hideous raw power with black and twisted humour may well be unmatched in the annals of rock. Certainly, they tread this wickes razor's edge with malicious deadpan glee, and I find the keen blade of their irony a splendid thing.


Tonight, the ony clues the offered to a rather witless audience were guitarist Gary Marx's irrespressible smirks. How the entire band managed to keep a straight face while Andy Snakeman negotiated the higher registers of their preposterous cover of "Jolene" will probably have to go unexplained.


More easily assimilable for the bozo in the street were such masterpieces as "Floorshow" and of course the rib-crushing "Body Electric". Already, the Sisters have coined some of the most malevolent riffs known to man, galvanic lacerations of noise driven firmly into the stomach by merciless drum machines. The appropriate physical response to the Sisters Of Mercy isn't a dance exactly, more a sort of horrible writhing motion. Dig it!


We were treated to an airing of the next singel "Anaconda", not perhaps vintage Sisters but serviceable enough, plus the slow gruesome slitherings of "Valentine", a nasty piece of work.


The Sisters Of Mercy command a shrewd grasp of their objectives plus the ability to project it. This is a rare gift, so treasure it.