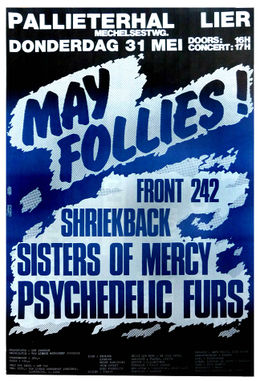 Part of The Sisters of Mercy's Spring Tour in 1984,


which consisted of 34 gigs in the US, the UK and on the European Mainland.

Further performers on that day included Shriekback and The Psycheldelic Furs

Pictures of this gig can be seen at: New Wave Photos by Phillipe Carly

Some entertaining info (including pictures of the venue and its surroundings)


can be found here in this wonderful blog...

Beyond that, the concert was recorded from the audience and is in circulation among the fanbase.

from this audience recording into a highly limited (what else?) 7" vinyl release.