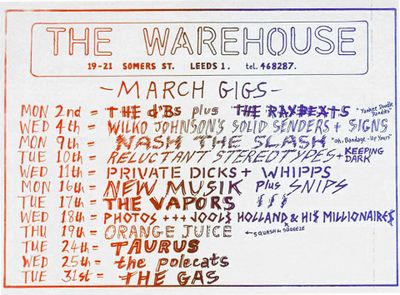 Announcement for the Reluctant Stereotype gig in March 1981

As the common and cooperate, unrelenting and tireless research of Sisters historians, archivists and collectors recently found, The Sisters of Mercy played their so far unknown second gig - and the first concert ever in their hometown of Leeds - on March 10th, 1981 as support act with the Reluctant Stereotypes at Leeds Warehouse.

Unfortunately, this has meanwhile proved WRONG.
So to our current and reaffirmed knowledge, The Sisters of Mercy's second gig - and the first concert ever in their hometown of Leeds - did take place in the course of one of the F-Club events organised by Leeds promoter John Keenan on 19 March 1981 at Brannigans, Call Lane/Lower Briggate, Leeds.

While the Reluctant Stereotypes did in fact play at Leeds Warehouse on that day, the only other performers at the event were Keeping Dark, according to Discogs, the rhythm section of the Yorkshire power pop band Just Frank.

Nonetheless, there are some interesting facts to note about both these bands:

Steve Smith is also known for guitars and backing vocals on the Ghost Dance single Heart Full Of Soul.

Anyway, for further interesting details on this concert, we recommend the lovely I Was A Teenage Sisters of Mercy Fan blog under Reluctant Stereotypes - March 10th 1981 ? ***


*** from where we've shamelessly stolen the lovely announcement picture here on the right side, although it doesn't mention The Sisters of Mercy ... ;-)) ...