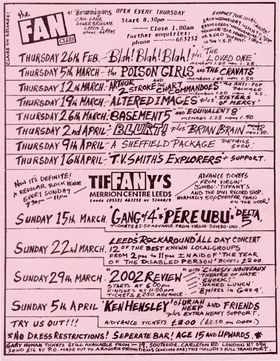 Flyer of The Sisters' support act with Altered Images

Supposedly, the second gig ever for The Sisters of Mercy - and the first one in their hometown of Leeds - took place in a cellar club called Brannigans. According to The Sisters' Official Gigography, the headline act on that evening were Altered Images.

At that point of time, the "F Club" brand for events had already officially been renamed into "Fan Club", while "F Club" remained in full use by the public as it shows in the review below. For further information on the F-Club in general and in detail you may look here.

There is not much known about this gig, so any further information is very welcome. Thanks to spiggymr7, we can at least provide you with the Brannigans's flyer on the left, and the gig review below on the right side. Please click into these files for larger views. In addition, he provided a interview with The Sisters of Mercy taken by Leeds fanzine Whippings & Apologies shortly after the present gig - the first interview ever with The Sisters of Mercy. It can be viewed (and read) in this thread @The Heartland Forums, including some clarifying remarks and memories from one of the interviewers ...

Another lovely read on and around this interview, with some interesting additional details can be found in the I Was A Teenage Sisters of Mercy Fan blog under the entry The first interview - March 1981. 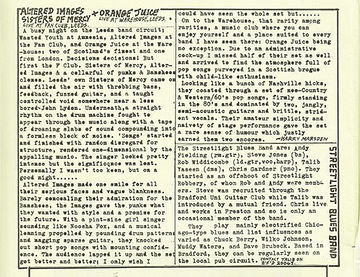 Review of the gig from WOOL CITY ROCKER Fanzine (Summer 1981)

unknown to us, though very likely it consisted of: