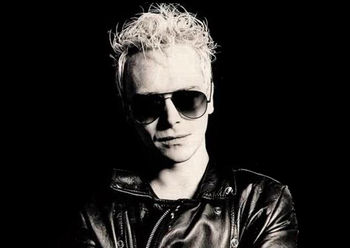 David Humphrey played guitars with The Sisters of Mercy for about three months from May to September 1981. As far as we know, his last gig with the band was at F-Club in Leeds on September 7th, 1981 .

Like Craig Adams, who also had joined The Sisters of Mercy only in 1981, Dave Humphrey was not involved
in the recordings of The Damage Done single, or, in his case, in any other Sisters release.
.
Having left The Sisters of Mercy, Dave Humphrey later moved to Bristol and formed his own band God Bless You, where he acted as the singer under the name of Dave Ryan. In 1987, they released a single titled Sugar. A still video featuring the track can be viewed here @YouTube.


Check also the lovely God Bless You Discography here @Bristol Archive Records, which includes some more pictures of Dave Humphrey and his band.

Any further information, as well as photos from Dave Humphrey's time with The Sisters should be very welcome.