Ad snippet taken from the original issue of the Heartland Anthology 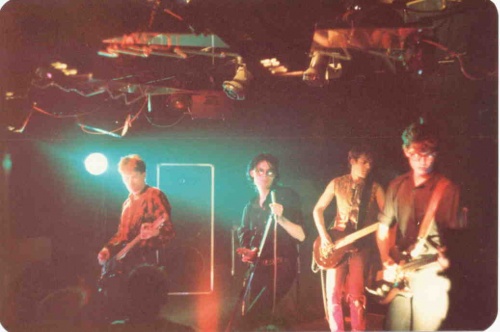 So far there is nothing much known about this gig apart from the fact that, indeed, it took place as was revealed by Andrew Pinnell in his Heartland fanzine. The picture on the right side was taken from the original Anthology of Issues I, II, and III. The reissue of this anthology shows the same picture but without a caption. The advert also confirms that this concert was one of the famous F-Club gigs organised by John Keenan, which by that time had been renamed into "Fan Club".

Most recently, this concert got mentioned in a long interview feature by Mark Andrews in The Quietus. We deeply encourage you to check out this entertaining and highly informing read under Life Before Alice: Andrew Eldritch, Leeds & The Birth of The Sisters of Mercy...

There is also a very entertaining and interesting entry about the present gig in the well-known sistersfan-blog I Was A Teenage Sisters of Mercy Fan, where it is listed under Iggy and Spiggy - Leeds, 2nd July 1981.

A while ago, we detected this lovely blog, which we thought had some photos from the gig and yes, we couldn't resist to upload one of these here ... Unfortunately, we had to find, that these photos were taken in 1983 and not in 1981, but hell, this one here looks so pretty, that we just keep it ... ;-)) ...


is always very much appreciated.