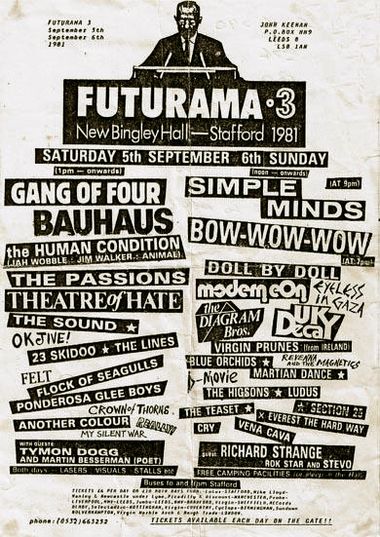 
Other acts on that day included the Gang of Four, Bauhaus, The Passions,


and the Theatre of Hate as well as on the following day the Simple Minds.


I Was A Teenage Sister of Mercy Fan Blog under Love for the Party - Futurama 1981.


and are in circulation among the fanbase.

Thanks to the lovely people at Heartland Forum ...

Was it really '81 ? Yes we played the Futurama Festival in Stafford - as to whether we were a last minute addition I couldn't say. My memories are of playing the gig very early in the day and Andy walking onstage and yelling 'bring out your dead' to the few Bauhaus and Theatre of Hate fans scattered around the largely empty hall.


Now here's one for you trivia fans - the Sisters' line-up that day included a certain "Dave Humphries" on 2nd guitar (it was actually his last Sisters gig I think). Not a name I've seen mentioned too many times in the Sisters' story.

See also the the official Ghost Dance forum - though, as this site shut down in 2015, the link here goes to wayback machine.