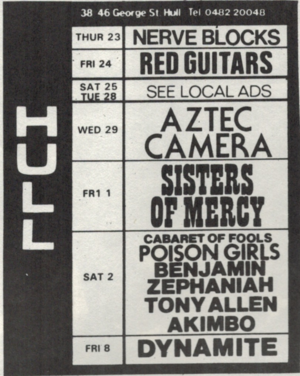 The final gig of The Sisters of Mercy's 1983 Spring Tour.

A Live Bootleg of this show has been released more recently.
It is most likely based on the mixing-desk recording of this
concert, which is in circulation among the fanbase as well.

Mixing desk takes from The Sisters soundcheck are also known
to exist, but hard to find nor are any details available about the
full contents of these testings. Some of these tracks can,
however, be found on the above mentioned bootleg.

Thanks to our dear friend spiggymr7, the above exerpt from the soundcheck featuring Gimme Shelter as well as
two mixing desk recordings from the show of Valentine and Ghostrider / Louie Louie have been made available
in still video format for a listen and are presented to you here.