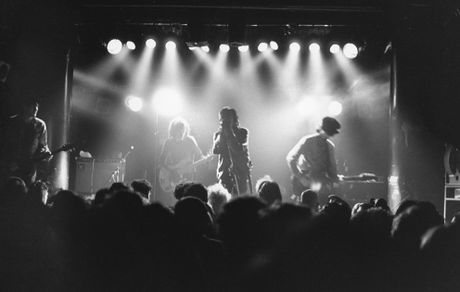 The Sisters of Mercy - live on stage at Danceteria, New York
Photo by Fred H. Berger for Propaganda Magazine

Part of the US-leg of The Sisters of Mercy's Spring Tour in 1984.


There is nothing much known about this concert. It, indirectly, got a mention, though, in an interview with the band from July 1984 as it apparently was the first concert, where lots of smoke were used during a Sisters gig, which had quite an impressing and inspiring effect, especially on singer Andrew Eldritch:

INT: What's the presentation like live with the Sisters of Mercy when they're playing at the concert?

AE: We got into smoke recently. They gave us smoke last time we played in New York
and we really got off on it. So we use a lot of smoke these days.

And we had a lighting engineer on the last tour who really knew how to light the stage
with smoke and we had a great time wandering around in this fog. It was very effective,
it was very very stupid, and very silly, but at the same time it really affected you like
smoke is supposed to affect you in that sort of bozo gut-wrenching heavy metal way.

Read the full interview at vamp.org/Prayers to a Broken Stone (scroll).


some live tracks from of this concert appear on vinyl bootlegs like ECHOES VOL. II, Green Eldritch, Time To Cry and The Acid Rain.

There were definitely two shows at Danceteria this week, I don't recall the exact dates but I attended both. I was an overnight DJ at a college station this spring and had already bought tickets for one show (I suspect Friday) and gave away a few tickets to a second show and I kept one for myself. I was at both shows, can't recall the setlist or much else. I wasn't sleeping a lot back then!

- this setlist is obviously incomplete -