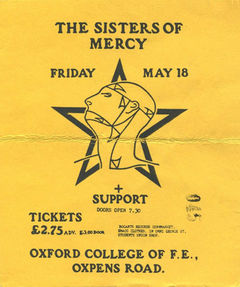 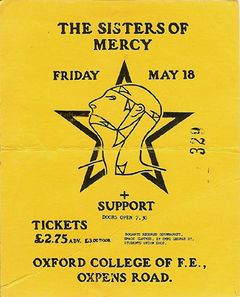 
the first and last concert ever, The Sisters of Mercy played in Oxford town.

NOTE: As a matter of relative likeliness, The Sisters of Mercy's soundcheck on that day might not have included
these tracks (if there was one at all). No recording of evidence has ever surfaced. On the other hand, the
idea of a soundcheck as noted here (and elsewhere) could well derive from the fact that these two songs
were the only songs from this concert that made it onto The Grief bootleg. Debates continue as there is
no proof to the contrary, either.


One point that should not be forgotten is, however, that traders of Sisters bootleg cassettes back in the days
partly tended to add tracks to (or delete tracks from) original and/or audience recordings in order to generate
"unknown" and "new" trading material, thereby fooling (and milking) fans and collectors for their own personal
benefit (thus, also causing decade-long irritations). It's been a bad world. And it has not changed to the better
in any respect ever since. But fortunately, those are in the minority ... 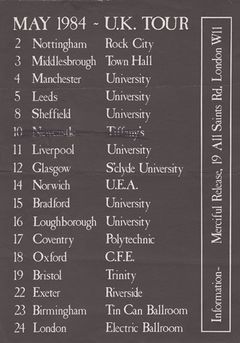 Our thanks for the pictures go to Heartland Forum member brunobossier.