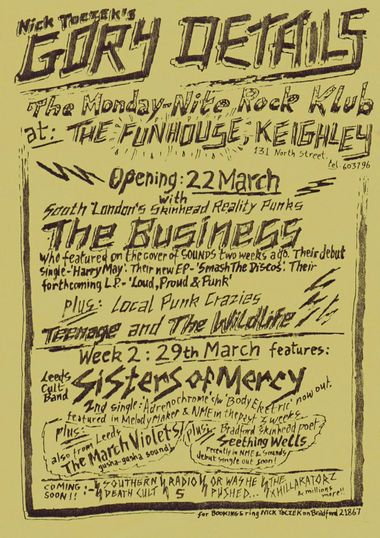 A gig from the early days, when The Sisters of Mercy were still yet touring the UK.


However, this was the first performance by The Sisters of Mercy in their first stable line-up,


after a year and few months with fluctuating members.

Further acts during this event: The March Violets and Seething Wells,


possibly the first gig ever for The March Violets as well.


Allegedly, some members of The March Violets joined The Sisters of Mercy on stage for the encore.

We have only rumours about this gig, apart from the announcement on the left.


There is, however, a recommendable article about this event in this lovely blog.


Beyond that, we recommend this lovely feature in The Quietus


which also mentions this concert more or less briefly.

The setlist for this gig is, basically, unknown; it did apparently include:

The encore after the regular set is said to have been:

Recordings from this concert do not exist. Any further information is very welcome.