The first of the German Superbang Festivals headlined by The Sisters of Mercy and/or The Ramones. 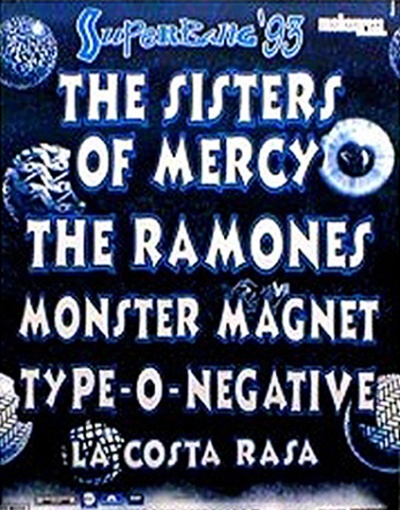 These festival gigs were part of The Sisters' 1993 Overbombing Tour.

Other acts on the bill of this festival tour included La Costa Rasa, Type-O-Negative
and Monster Magnet. However, none of the bands did play all the venues.

An audience recording of the Sisters' show titled Kassel 1993 does exist.Here's an excerpt from the accompanying taper's textfile:

After Monster Magnet, we had to leave the venue, 'cause some left-wing people told the venue
- accusing Type-O-Negative they were a right-wing nazi band - that they had installed some
bombs which they would bring to detonation as soon as Type-O-Negative started playing ...


No bombs were found and after one hour in a nice cold December night,
we could go in again for our festival without Type-O-Negative of course...