Superbang '93 - Large tour anncouncement banner displayed at the summer festivals - the concert in Saarbrücken was marked with an asterisk, as it was set to take place without The Sisters of Mercy. 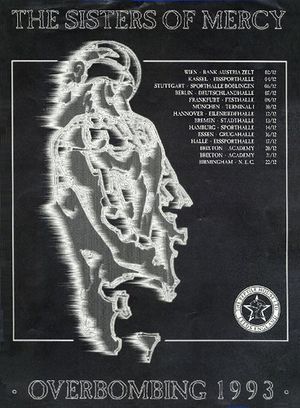 The German leg of this tour was promoted as a festival event called "Superbang '93",


which included, apart from The Sisters of Mercy, The Ramones as a second headliner, as well as


None of these bands did play all the venues, not even The Sisters. While The Ramones played a final


Superbang gig with Monster Magnet and Type-O-Negative on December 18th in Trier, Germany,


The Sisters of Mercy and La Costa Rasa were on their way to the UK leg of the Overbombing Tour.

Remarkably, at the beginning of the tour, Type-O-Negative were accused to be a fascist Nazi-band


their set. Consequently, the band did not appear for this gig and passed on the concerts in Hamburg,


Essen and Halle as well.


La Costa Rasa, on the other hand, seem to have missed the gig on December 6th for unknown reasons.


In addition, they were not booked for the final gig of the tour at the Brimingham NEC. Special guests


on that bill were the then popular UK electronic rock band Curve. 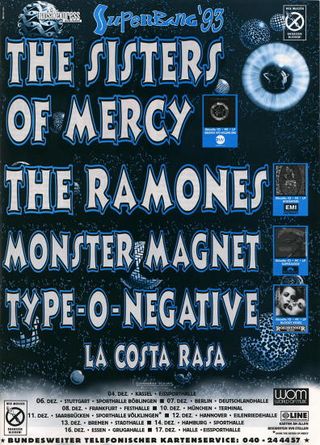 As keyboardist and background singer Suzanna Josefowicz had left the band after the summer festivals,


she was replaced by Hermine Karo, also known as Hermine von Wiro. There is, however, hardly anything


known about Hermine Karo and she, too, left the band again after the tour.

On second guitars was - like during the summer festival gigs already - Adam Pearson. 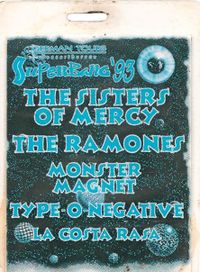 Vision Thing guitarist Andreas Bruhn, on the other hand,


left The Sisters of Mercy after this tour to follow other perspectives.

Most concerts of this tour were recorded from the audience 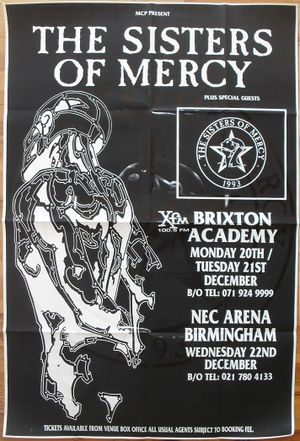 Announcement poster for the UK gigs

and are in circulation among the fanbase. These are marked ***.


Audience video recordings of the gigs in Vienna (see Donau So Blau),


Essen and the London gigs (see Brixton 93) do exist as well.

Our thanks for the first four shirt pictures go to ribbons69.

A Selection Of Bootlegs Derived From This Tour

- Please click into the pictures for possibly larger views -