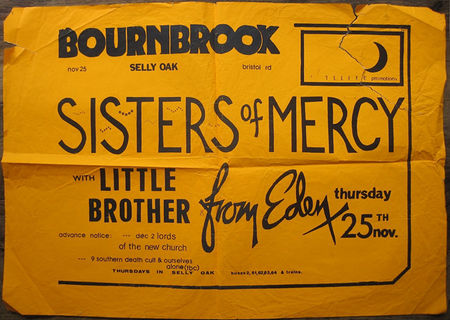 Initially, due to the poster on the left, we only knew that - in all likelihood - this gig took place.


Evidence has now been brought by the wonderful blog "I Was A Teenage Sisters of Mercy Fan".


Check the post Crash And Brum 1... there and learn more about the event and its circumstances ...


will most likely remain unresolved.

Support acts were Little Brother, a poet and stand-up comedian from Bradford and From Eden.


For some information on Little Brother, we recommend you check this lovely page on him. 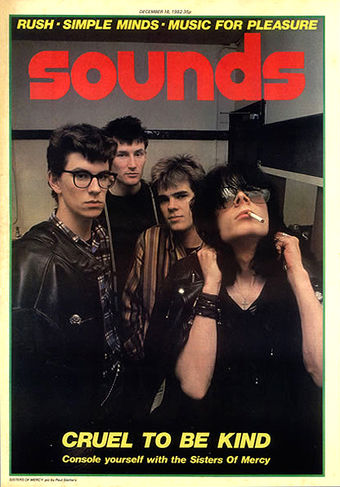 A recording of Little Brother's show, most likely similar to the one he should have performed here, was


recorded and released on side AA of a vinyl album, side a of which features a performance involving Jon Langford.


An audio file of the tracks as well as views of the record and cover are available here.

Production is credited to Kenny Giles, known for his studio in Bridlington, where The Sisters of Mercy


recorded various demos as well as their 7" singles Alice and Body Electric. The first singles by The March Violets


were recorded at KG Studios, too.

Second support act From Eden was actually a Grebo band from Stourbrigde consisting of Clint Mansell,


surfaced featuring various demos from 1983 recorded by From Eden.


From Eden supporting The Sisters of Mercy in 1982.

The remaining members of From Eden recruited Graham Crab and also Richard March,


changed their name, released an EP and then, in 1986, eventually became Pop Will Eat Itself.


Here's an interview article about the band and their biography at the fansite / forum pweination.com,


the cover of Sounds shortly afterwards.