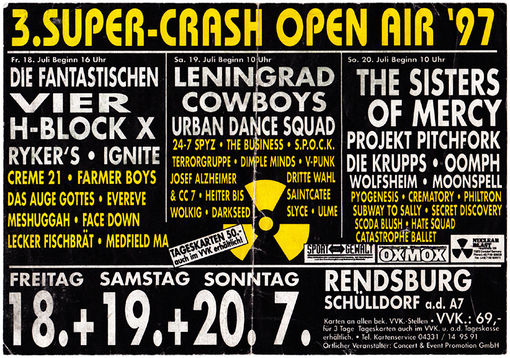 As the final gig of their Distance Over Time Tour, The Sisters of Mercy headlined the last day of a three-day festival in Northern Germany, perfoming one of the very few concerts with four encores.

Headliners on Day 1 and 2 were Die Fantastischen Vier and the Leningrad Cowboys, H-BLOCK X and the Urban Dance Squad were among the more renown bands on these days.

The concert gained a certain degree of awareness for the re-introduction and the extensive version of the Sister Ray - Medley and for Andrew joining Die Krupps on stage during their performance of Fatherland, a remix of which he had done together with Rodney Orpheus of The Cassandra Complex for their 1994 album The Final Remixes. You might want listen to the track here under Remix or down below on the right. During the Rendsburg show, Eldritch sang however "Motherland" instead of "Fatherland".

An audience recording of The Sisters' performance at this festival is in circulation
among the fanbase and has surfaced on a bootleg-CD titled Deep Blue vs. Dr. Avalanche. 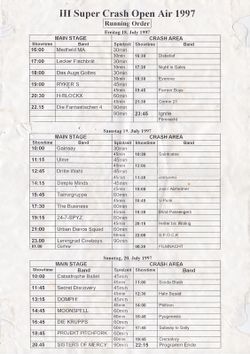 And a last Encore

Lucretia, My Reflection / Killed By Death ...