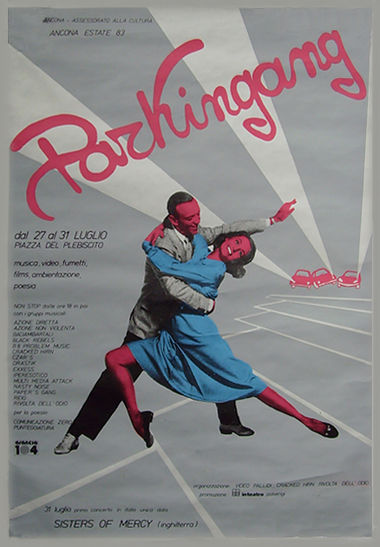 While for decades, Mallemunt Festival in Brussels was seen as the very first gig of The Sisters of
Mercy in continental Europe, fanbase research has now revealed that the band played the above
mentioned festival already five days earlier.


Read all the details of this exciting news in The incredible untold story of the first TSOM gig abroad
at the most wonderful I Was A Teenage Sisters of Mercy Fan Blog ... from where we kidnapped
the lovely announcement poster on the left and ... err ... slightly modified it ... :-))) ...


Even more exciting is the fact that some audience recording from this concert has surfaced as
recent as September 2018 on YouTube!!! The recording is in mono. The uploader aurelio laloni
comments his still video as follows:

Here it is for the first time! the first Sisters Of Mercy gig out of England in the far 1983 July 31 -
A brief history about the registration. Patrizio, this is the boy's name thanks to which we have
an audio testimony of the first Sisters Of Mercy gig in continental Europe, that day he went to
the sea with his Vespa scooter, in the late afternoon instead of going home he decides to come
to the Sisters concert even if he does not know anything about the band. he has his cassette
recorder and a single tdk c60 cassette with him where he has already recorded the live of a
local band. Fortunately, their live set was very short, about 17 minutes, so it still has about
43 minutes free on the tape. At the beginning he is not very convinced by the band but the
more the minutes flow the more he falls in love with the band! at one point he is afraid of not
being able to record the whole show and so he tries to optimize the space on the tape by
cutting the pauses between one song and another, or like in Gimme Shelter cutting the final
(grrrrr). Another song: Burn is at the end of the A side of the tape and as far as he quickly
turns the tape, a part of the song is lost! the cassette ends with Body Electric whose final
part is missing...