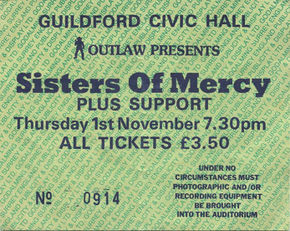 The first November gig of The Sisters of Mercy's Black October Tour in autumn 1984,


Other acts included the Skeletal Family.

Audience recordings ot this gig do exist and are in circulation among the fanbase.


A press review can be found down below. 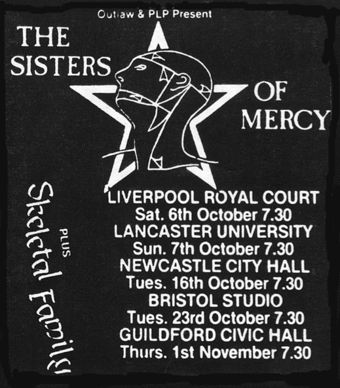 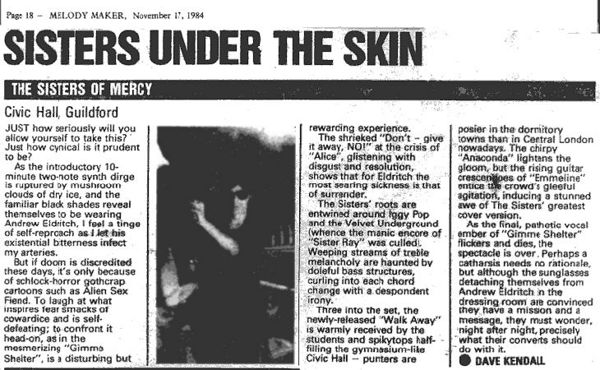 
SISTERS UNDER THE SKIN

JUST how seriously will you allow yourself to take this? Just how cynical is it prudent to be?
As the introductory 10-minute two-note synth dirge is ruptured by mushroom clouds of dry ice, and the familiar black shades reveal themselves to be wearing Andrew Eldritch, I feel a tinge of self-reproach as I let his bitterness infect my arteries.
But if doom is discredited these days, its only because of schlock-horror gothcrap cartoons such as Alien Sex Fiend. To laugh at what inspires fear smacks of cowardice and is self-defeating; to confront it head-on, as in the mesmerizing "Gimme Shelter", is a disturbing but rewarding experience.
The shrieked "Don't - give it away, NO" at the crisis of "Alice", glistening with disgust and resolution, shows that for Eldritch the most searing sickness is that of surrender.
The Sisters' roots are entwined around Iggy Pop and the Velvet Underground (whence the maniac encore of "Sister Ray" was culled). Weeping streams of treble melancholy are haunted by doleful bass structures, curling into each chord change with a despondent irony.
Three into the set, the newly-released "Walk Away" is warmly received by the students and spikytops half-filling the gymnasium-like Civic Hall - punters are posier than in the dormitory towns in Central London nowadays. The chirpy "Anaconda" lightens the gloom, but the rising guitar crescendoes of "Emmeline" entice the crowd's gleeful agitation, inducing a stunned awe of The Sisters' greatest cover version.
As the final, pathetic vocal ember of "Gimme Shelter" flickers and dies, the spectacle is over. Perhaps a catharsis needs no rationale, but although the sunglasses detaching themselves from Andrew Eldritch in the dressing room are convinced they have a mission and a message, they must wonder, night after night, precisely what their converts should do with it.
DAVE KENDALL