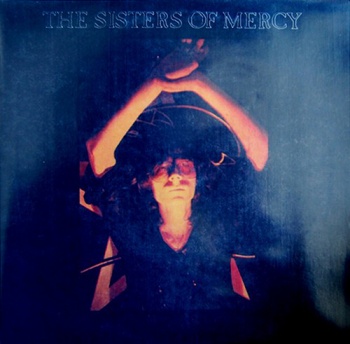 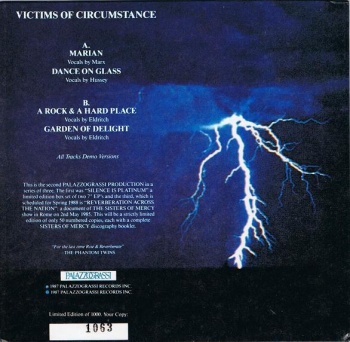 Victims Of Circumstance 7" Vinyl Cover Back

The second of four Palazzograssi

All Tracks Are Demo Versions

This is the second PALAZZOGRASSI PRODUCTION in a series of three. The first was "SILENCE IS PLATINUM", a limited edition box set of two 7" EPs and the third, which is scheduled for Spring 1988 is "REVERBERATION ACROSS THE NATION": a document of THE SISTERS OF MERCY show in Rome on 2nd May 1985. This will be a strictly limited edition of only 50 numbered copies, each with a complete SISTERS OF MERCY discography booklet.

"For the last time Rise & Reverberate" - THE PHANTOM TWINS

For recent price developments see sistersbootlegs/Victims Of Circumstance 7" or popsike.com/Victims of Circumstance... 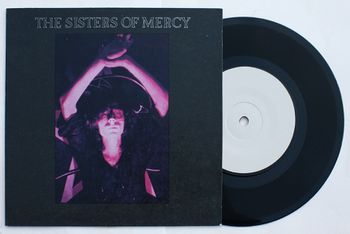 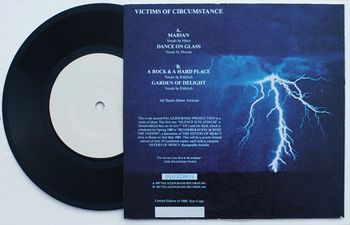 Test Pressing with non-gatefold cover (back)

Remarks on released and unreleased issues

Black vinyls with numbered sleeves, which have an additional print on the inside, do exist as well.

the front instead of black; they are not numbered and have some additional print on the inside.
No information on how many of these were done or distributed available so far.

Both (black and white vinyl) editions are allegedly not numbered, though numbered versions have been
sighted. However, although the cover states that the EPs were limited to 1000 copies, some owners of
this record had to note that the white box on the sleeve for the individual numbering is blank.

the sleeve of which only a dull matt proof, without any lamination or numbering. This test
run consisted of two copies only. However, Palazzograssi were not content with the quality
of this pressing and chose for another pressing plant, hence the different catalogue#.

According to our information, Palazzograssi experimented a lot with different colours for the sleeve of this record.


The following variations were done, but never got released or distributed:

Test-proofs were done, but the idea was abandoned later. These sleeves were, of course, not numbered.

The colour of the background print on the inside of the gatefold is silver-metallic.