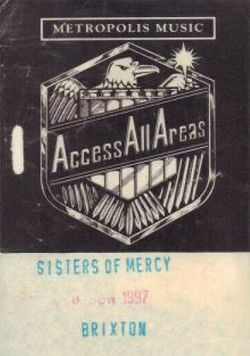 Second gig of The Sisters' Distance Over Time Tour


and the first of two show at Brixton Academy during that tour.

Various audio recordings and also an audience shot film from this evening and the next one exist,

A few photos from the show can be seen here. Just click on Show pictures.


A hell load of more pictures can also be found here.

Some reviews are available at SistersTours/1997/06/09/Brixton Academy.