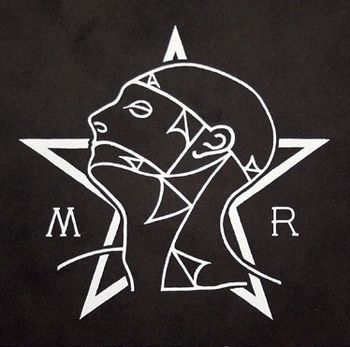 The first band logo as on the 1980 single

One of The Sisters of Mercy's gigs within the F-Club series in Leeds... basically ...


However, since F-Club organiser John Keenan noted that F-Club events at Brannigans


ran until May 1981 only, it is questionable, whether he really was the promotor here


and whether this was an F-Club event at all. As far as our information goes, only a dozen


people were at the gig, which makes it even less likely that J Keenan organised the concert


as part of his F-Club events. There is also no recording from that gig.

The Sisters of Mercy had performed with the Screaming ab-dabs as support act that night, 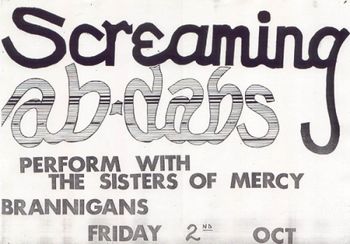 A3 Announcement Poster made by the Screaming ab-dabs

who reportedly also created the lovely advert on the right side...


the time. Rumour has it that Andrew Eldritch - during his time as a "drummer" - had joined


the Screaming ab-dabs on drums for a time and was involved in recording some demo track.


However, in order to avoid being confused with other bands of a similar name


the Screaming ab-dabs soon changed their name to The Flowers of Evil. In 1982, their first


(and only known) 7" single was released under the title First Blood. Recordings and production


took place at Kenny Giles Studios in Bridlington, where Andrew Eldritch, too, got in touch with

Any further information on this gig and its surroundings is very welcome.

- in unconfirmed order and possibly incomplete -