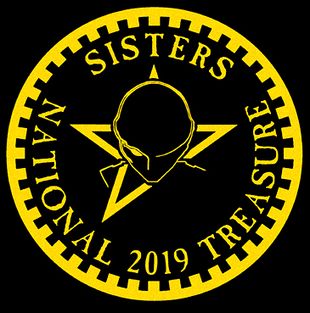 A new two-fold tour logo was introduced for this tour

After the European Summer Festival Tour with six concerts between June
and August 2019, where The Sisters of Mercy introduced their new guitarist
Dylan Smith to the curious and excited crowds, the band prepared for a
worldwide club tour in autumn. This so-named National Treasure Tour
started with two double-gigs in London and Brussels mid-September and
a further 16 concerts in Western and Northern Europe seeing The Sisters
of Mercy return to Denmark, Norway, Sweden (3), Poland (2), Germany (6),
Luxembourg, France and The Netherlands - 20 concerts in total of which
only three did not sell out. 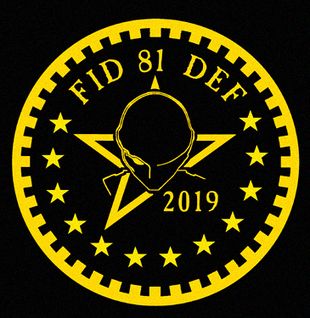 The new tour logo as on front of the tour-shirts

While most of the tourdates had been confirmed already at the beginning
of the year, two pre-tour concerts in Greece were added in April. And what
surely was more exciting for the majority of the fanbase: on the day before
the first of these Greek events, a mysterious hint at a so far unknown of
performance at some strangely unavailable  venue in Antwerp appeared
on The Sisters' Live News Page. Apparently, one of the rare and exciting
Near Meth Experience trials that regularly occur before larger tours when
new members join the band. In addition, the folllowing words were mentioned
below the tour schedule like:

apparently indicating song titles and immediately raising hopes that to the pleasure of everyone a whole range
of new songs was to be presented during this tour. And so it was. Although not all of these new tracks did see
the light of day, Show Me and Better Reptile became a regular part of this tour's setlists, just like the new and
to-day untitled instrumental track that was introduced to the audience in Greece.


The last concert in Europe for this round part took place in Utrecht, NL on October 20th, 2019. Five days later,
The Sisters of Mercy embarked to Australia and Auckland, New Zealand for another six gigs, where the concerts
in Melbourne and Brisbane had sold out.


This years Latin America trip came with a few re-arrangements and cancellations. So that of initially six gigs only four in Brazil and the finishing concert in Mexico
remained. Another visit of Chile had to be given up upon the political situation and a first envisaged concert in Uruguay could not draw enough interest to pay organisers'
expenses. The final concert in Mexico City at Circo Volador was fully recorded in audio and video formats from the audience. All in all, it was a great tour of a refreshed
band with a new guitarist, new songs, a new tour logo, new merch ( including eventually a First And Last And Always motive mug and lots of new old tees). The only slight
drawback was the cold that singer Andrew Eldritch had caught at the Wrocław gig, which made the rest of the European leg for him not as much a pleasure as it should have.
But hell, that couldn't damage the general feel of fresh air and change and inspiration in The Sisters, and by the time the band had reached Australia, the cold was gone.


Anything else? Oh yes, the person seen with a keytar in the scaffolding opposite the stage ... was the light technician.


Btw, apparently a reissue of Gift is in planning, as flyers for this release were spread at all the concerts of this tour. Relatively soon, though, first doubts about the credibility
of such announcements emerged, see the thread Gift reissue plus extras at the Heartland Forums. 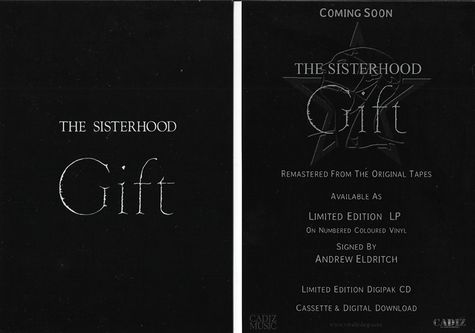 please check the according sections.

The Sisters of Mercy - a new guitarist and a new instrumental - Fix Factory of Sound, Thessaloniki, Greece, 12.09.2019 -   * video by Vangelis Anastasiou

After The Sisters' last concert in Thessaloniki 10 years ago had ended in a glorious
but not all that orderly way, and the one in Athens that year had to be postponed,
some years were to pass before The Sisters of Mercy would make it to Greece again.

But in the wake of their summer festival activities, two concerts perfectly fitted in and
The Sisters of Mercy presented the Greek crowds with their new guitarist Dylan Smith
and the introduction of a new instrumental. To open both concerts they brought with
them the remarkable London-based A.A.WILLIAMS, who would accompany almost
all of the following European tour gigs.

For extended details and more information about both concerts see:


Full-show audience video recordings from both performances by The Sisters of Mercy as well as of A.A.WILLIAMS are available under the links above. 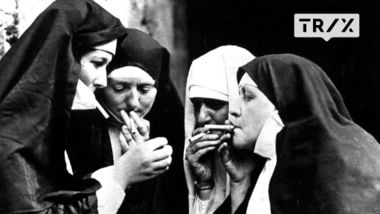 One day before the concert in Thessaloniki in Greece took place, The Sisters of Mercy announced
a further performance in the city of Antwerp on the Belgian coast. Below the tour schedule of the
official Live News page the titles of some new songs appeared like:

This turned out to be one of the rare, free and famous Near Meth Experience shows in preparation for the oncoming tour. As the concert was announced on relatively short
notice, the TRIX was nicely filled but not overcrowed, and there were many locals from the area in the audience, who had never heard of The Sisters before. But of course
also plenty others ... ;-))) ...


And indeed, Kickline, Better Reptile and Show Me were performed during this free concert for the first time in their then still rawer versions. Thankfully, some high-quality video
recordings of these three songs are available here below, and a few more on the page for this event. Check also this thread @The Heartland Forums to follow developments
as they evolved. The concert was obviously recorded, but none of these recordings has surfaced so far. Très dommage.

This year, The Sisters' South America travels reached further than ever .... or could have ...

For this tour, new t-shirts with a two-fold logo were made. The artwork looked like a coin with the different sides spread on the front and back of the tees, respectively. The front side said "Fid 81 Def 2019" combined with the new head-and-star logo missing one prong, where the year was printed. The back print said "SISTERS NATIONAL TREASURE 2019, also without the fifth prong of the star. The latter text finally was voted by the fanbase to be the best name for the National Treasure Tour 2019. Beyond this, a new series of Walk Away t-shirts were offered as well as glossy black print on black long-sleeve sweaters with the old head-and-star-logo and some classic logo hoodies, also beanies and tote bags with a Black October Tour logo-like print, mugs with First And Last And Always design, badges like the New Enamel Badge and the Embossed Merciful Release Metal Badge as well some official Dog Tags with the old Head-and-Star logo.

Many thanks to the uploaders and contributors of these photos. For larger views, please click into the files. Some of the picures were taken from The Sisters of Mercy's Offical Online Merchandise Store, where these and/or other items are available.

As mentioned before, three new songs were introduced during this tour: Show Me (On The Doll), Better Reptile and Kickline, the latter so far without lyrics and played only
once during the Near Meth Experience gig at TRIX in Antwerp. The new so far untitled instrumental introduced during the concerts in Greece after the Summer Festival Tour
remained part of the set and replaced Jihad as Von's instrumenal tea break. Also Arms was performed only once at the second Roundhouse gig and Susanne only three
times, twice in London and once @Ancienne Belgique. Removed from the set were most of last year's 1980s tracks like Body Electric, Kiss The Carpet, Body And Soul,
Walk Away, A Rock And A Hard Place and Amphetamine Logic, but also Summer and Romeo Down.


Another attempt to run When You Don't See Me throughout the tour on the setlist ended after five gigs into the main tour, when The Sisters of Mercy's fog machine once
again triggered the fire alarm at Amager Bio, Kopenhagen, Denmark and When You Don't See Me as well as First And Last And Always fell victim to the following break.
However, this had The Sisters forcibly play without fog for the rest of the show, which for those present was a special - and not bad, indeed - event in itself....


As a further remarkable step, More was replaced as the opener during the Near Meth Experience preparatory concert @TRIX in Antwerp. And when the first two shows of
the tour in London were done, it moved down indeed to the encores for the following eight nights - before it took back its usual place again in Wrocław, Poland. For the first
Belgium concert and all north European gigs, Dominion/Mother Russia opened the show, except for Malmö and Berlin, where First And Last And Always were played to
warm up the crowds. However, for sure the most exciting dent was made when Alice opened the second concert @Ancienne Belgique. The final show in Europe of this tour
@TivoliVredenburg, Utrecht, NL saw A.A. Williams, singer of the support act for this part, join The Sisters on stage and was heard on additional vocals on the then again
opener More as well as on Something Fast and This Corrosion. She also had added her vocals to the latter two tracks before at Columbiahalle, Berlin in Germany halfway
through the European part of the tour.


Basically, this tour's setlist - other than for decades before - consisted of a 15-track main set and a 4-track encore mostly featuring Lucretia, Temple of Love and, finally the
usual This Corrosion end-of-show party song. These were added in encore track position #1 or #2 by either Vision Thing, More or for once, at Ancienne Belgique in Brussels
by First And Last And Always.